Chimpanzees, and their cousins the bonobos, are our closest evolutionary relatives. That doesn’t mean that we are descended from chimpanzees.
Fact: Humans and chimps share a common ancestor from about 4 million years ago. That’s when the populations split, with humans evolving from one branch and the other becoming the common ancestor of chimpanzees and bonobos. These two species only separated about a million years ago, probably when the Congo River formed and isolated the populations. We share at least 90 per cent of our DNA with chimpanzees, and possibly as much as 99 per cent.
Fact: The fact that we still look so different is partly because a lot of the genes that we don’t share are the ones that control the behaviour of the genetic regulation mechanisms themselves. This means that even quite small genetic differences can have a big impact on the way that our bodies develop and grow.
Fact: Chimpanzees would be almost as tall as us if they stood fully upright, but their bodies are designed for quite a different posture. Chimps spend a lot of their time in the trees and have long, powerful arms that make it easy to swing from branch to branch. Chimpanzees can stand and walk upright, but their skeleton isn’t adapted to do this easily.
Fact: Their thighbones slope outwards more than ours and the knee joints don’t let their legs fully straighten. This forces chimps to adopt a side-to-side waddling gait that is slower and less stable than ours. On the other hand, having longer arms and a spine that doesn’t curve into an ‘S’ shape makes it easy to walk on all fours and look ahead at the same time.
Fact: Chimps stand upright to walk when carrying something, or to make themselves appear larger and more threatening, but they prefer knuckle-walking most of the time. 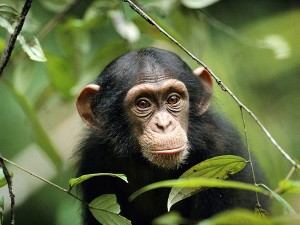 Fact: Chimpanzees don’t only eat bananas and fruit as you might expect. While fruit and plants do make up the bulk of their diet, they aren’t fussy eaters and will also dine on insects, eggs and meat. They hunt in small groups and their powerful jaws and sharp teeth mean they are quite capable of catching and killing small deer and antelope.
Fact: Chimpanzees aren’t quite at the top of their food chain though – leopards are their number two predator, after humans. But leopards don’t always have things their own way; chimpanzees use sticks to defend themselves and, when acting co-operatively, can often kill the big cat.
Fact: Chimps will always try to run from humans, but if cornered they can be very dangerous and have been known to kill people by grabbing them by the feet and dashing them against the ground.
Fact: The brain of a chimpanzee is less than a third the size of ours, but nevertheless they show a high degree of intelligence, even compared to other great apes.
Fact: Chimpanzee females whose child has died have been observed to carry the body around in an apparent display of mourning.
Fact: When they encounter other animals they sometimes behave in ways that seem purposely cruel or kind, rather than simply hunting or fleeing. For example, chimps will sometimes kill a tortoise by forcing a stick into it, but they don’t then eat the tortoise. Is this just for sport? On other occasions chimps have been seen feeding tortoises, almost as if they were pets.
Fact: Sometimes, when chimpanzees encounter a python, they gather round to watch it, apparently torn between fear and fascination. A python is normally neither food nor a threat to a chimpanzee and yet they can watch the snake for up to half an hour, touching and hugging one another for reassurance while they do, just like we would during a scary movie.
Fact: Their similarity to us means that chimpanzees have been used as research subjects to test drugs and medical procedures. Only the USA and Gabon in Africa still perform medical research on chimpanzees and most of those used in the US have now been retired to sanctuaries. In the past though they were used quite widely; indeed, 400 chimpanzees were bred in US labs in the Eighties and Nineties for HIV research alone. Two chimps were even sent into space as part of the early US space programme. Ham, a three-year-old chimp, was the first in 1961. Although he touched down safely, he didn’t appear to enjoy the experience, refusing to stay in the flight seat for photos.

Facts about the social order 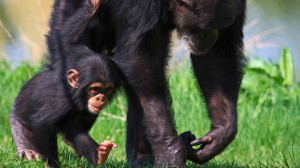 Fact: Chimpanzees live in communities of 40-60, but they travel and hunt in smaller troops of ten or so which are constantly changing as individuals move between troops.
Fact: Males and females each have their own hierarchies. The males have a single ‘alpha’ in charge of the whole community. This is partly decided by age and strength, but politics plays a role too. Alpha males that are able to form lots of alliances are more likely to hold on to their position and, conversely, females will sometimes conspire to topple an unpopular male in favour of another who would make a better leader. Mothers have extremely close bonds with their children – especially their daughters. Social status in chimpanzee females is partly hereditary with the daughters of high-status females having disproportionately higher status of their own. Within a community social grooming and food sharing helps to keep the group together, but reactions to other chimp communities can be quite hostile.

As early as 1913, research on chimpanzees showed they don’t simply solve problems through trial and error, as is the case with virtually all other animals. Instead they are capable of that ‘Aha!’ moment that demonstrates true insight. For example, chimpanzees will stack crates to build a tower to reach bananas that are out of reach and sharpen sticks to use as spears when hunting, or to poke termites out of their mounds. This behaviour isn’t innate, but learned by children copying adults. Nest building, in particular, is a skill explicitly taught by a mother to her infants.
There are limits to this intelligence though. Chimpanzees don’t appear to ask questions. Unlike human children, who question everything, chimpanzees never seem to wonder why or how or when. Several chimps have been taught sign language, but they only ever answer their trainers’ questions, rather than posing their own.
A chimpanzee that has been taught to perform a task will keep tackling it the same way even if the problem has been slightly modified to make the old solution impossible. The evolutionary psychologist Joseph Jordania has suggested that the ability^ to ask questions might be the crucial ability that lifts us above the apes.

PREVIOUSTOP 3 FASTEST ANIMALS IN THE WORLD